Mega Blocks and Destiny team up to build an IRL avatar

Comings and Goings of Netflix for July

Fallout New Vegas is now backwards compatible with Xbox One

Mighty No. 9 end credits are over 4 hours long, credits every backer from kickstarter

Zelda producer would like to make a multiplayer game next

DareDevil for the PS2

Evo 2016 breaks record and becomes the biggest Melee tournament of all time, July 15

Killing Joke gets a 1 day theatrical release on July 25

Guardians of the Galaxy 2 has wrapped up filming

No Man’s Sky Lawsuit Sky TV in London, made Microsoft change to OneDrive

Elder Scrolls 6 in development. Will be released after 2 more unmentioned games

Legend of Zelda: Breath of the Wild is very large. 12 times larger than Twilight Princess

Anthony Hopkins in Trans 5 as the Hannibal Lecter of the robot universe, Unicron

Jake Gyllenhaal to star in The Division Movie

Horizon Zero Dawn pushed back until Feb. 28, consolation prize of a new trailer

PS4K confirmed but won’t be shown at E3

Destiny: Rise of Iron new DLC not for Last Gen

Maybe I’m looking back with rose-colored glasses, but I seem to be one of the only 7 people  in the world that liked the original Watch_Dogs. I watched the preview trailer at E3 and was excited for it, as most people were. I picked up the game on release day, but unlike most people, I wasn’t immediately disappointed with the game because of the lack of incredible visuals. That is one of the flaws of Watch_Dogs. They showed it at E3 with incredible visuals and then when the game didn’t meet those expectations, people were up in arms. Soon they were finding other problems with the game, other reasons not to like it. I for one, enjoyed the game and enjoyed my experience with the game throughout most of the campaign and for a couple days after on the online multiplayer.

The main character, Aiden Pierce, is mostly forgettable. I actually had to Google his name to make sure it was correct. And the story is even more forgettable. I can’t remember anything that happened other than the end was a let down. I think there was a mercenary, but I can’t be sure. What I really enjoyed about the game was the setting and the mechanics. As someone originally from the Midwest, it was nice to see Chicago represented in a big budget video game. And while Chicago isn’t the only city to feature an above-ground train system, it felt like Watch_Dogs used it in a way that other games have been trying to for a long time. Once upgraded enough, Aiden could use his hacking abilities to stop and start the train from on top, which makes for some pretty entertaining evasions from the police. He could also control security cameras, manhole covers, ATMs, stoplights. Anything connected to the fictional ctOS system, which essentially is a city-wide communication array (easily hackable).

Unlike other games, there was no mini-game when you needed to hack something. It was just point and click. You wanted it done and it was done. Along with access to ctOS you would have a way to monitor random NPC’s. You would be able to look into their bank records and see their annual income, their occupations, age, and hobbies. Most people on the street were pretty mundane but occasionally you would find someone with a hilarious background. Kotaku has a page with some of the best.

So the city of Chicago was a good place to start. It wasn’t LA or NYC or Miami, places that I have been to before. It was a familiar place to me. While the city as a whole was great, it was the minor set pieces that really stick out.

One of my favorite things to do was drive some fast car through a tunnel with a draw bridge on the other side. Once the bridge was in sight, I hit the hack button and raised it, giving myself a makeshift ramp. Then, while driving at full speed, I would launch myself onto the aforementioned railway system and ride that for as long as I could. If I ever was chased by the police, my main goal was to get to that part of the city and use that exact escape route, leaving the in-game police in awe of my hacking and driving capabilities.

Along the same vein as that, there is a mission where you go to scrapyard and can activate all of these mechanical contraptions to defend the position. I had a lot of fun controlling the fire-breathing dragon machine while lobbing grenades to lure people into the inferno zone.

Another zone that I fondly remember is an enemy controlled tower. You had to assault the thing floor by floor, imagine the movie The Raid, fighting increasingly difficult enemies as you go. It was awesome, I had so much fun. Also (Spoilers) at the end, you can kill someone by hacking into their pacemaker and turning it off, so that was fun.

Anyway, Watch_Dogs 2 was announced with an 18-minute trailer/ behind the scenes look. New character, new city (San Fran), new hacking tools. Ubisoft is notorious for having good sequels (Assassin’s Creed to Assassin’s Creed 2, Far Cry 2 to Far Cry 3, Rayman to whatever Rayman is out now). But even without that track record, if they released Watch_Dogs 2 with an updated story, some new mechanics and a likeable character I would buy it in a heartbeat. I don’t need to see anything other than what’s in this trailer as I am already sold. Come November 15, I’ll be in line waiting to plunge back into the world controlled by Deadsec.

In this episode, Justin and Tony talk about their experience with X-Men Apocalypse. Also, news of No Man’s Sky being delayed has an emotional effect on one of the cast. There are rumors that Pokemon is having translation issues and the question is posed if Assassin’s Creed would have originally made a better movie than a videogame.

In this episode of Underpaid Gamers Podcast Tony and Justin discuss Gamespot’s game of the year award for the last 20 years. Additional topics include No Man’s Sky delay, Captain America, Netflix, and Nintendo’s rumored new handheld. Listen in for a good time! Check out our youtube page!

No Man’s Sky delayed until July or August, originally scheduled for June

Captain America is a Hydra Agent?

John Carpenter coming back to Halloween

GameSpot Game of the Year for 20 years

Okay, here is the deal. I’ve tried writing this at least two times before now and each time I’ve written way too much and have gone way too deep into detail. So this time, I’m just going to throw out some bullet-point style segments and let you choose.

Who’s side are you on?

Civil War is about the Registration Act, a bill combining the efforts of SHIELD, representatives of those with superpowers, and the US Government, representatives of casual civilians. It came into effect after a couple of series of devastating fights between heroes and villains in the Marvel world. The Registration Act essentially wants heroes and villains to register their secret identities with the government so that the government can decide when these superpowered people can act and at what certain level. This essentially strips the superheroes of their right to decide right from wrong and to use their powers freely.

Ironman is a staunch believer in this, as he has seen the destruction caused by himself and other superpowered people first hand. And while he has good intentions that are fleshed out throughout the comic, I think that his means do not justify his ends but I’ll let you decide.

Captain America is a believer in the freedom of choice and fighting for the rights of everyone. This is evident in his origin story that, before the Super Soldier Serum, while he was pathetic in physicality, he was superior in compassion and judgement.

Well look at that, this was supposed to be shorter. After Captain America is captured and the Civil War is over, his team goes underground to keep fighting against the RA. Ironman is now the Director of SHIELD stating that he is the only person that he trusts with the secret identities of all of his closest friends. Spoilers ahead: As Captain America is leaving the courthouse where he is being tried, he is assassinated by an unknown sniper. This starts the comic The Death of Captain America which plunges both sides of the Civil War into grief, specifically Ironman who feels his is personally responsible for the death of Captain America.

So I ask the question again, who’s side are you on? Ironman who has good intentions at heart but is willing to go to extreme lengths to make his vision a reality. Or are you siding with Captain America, a man who fights for the freedoms of superheroes and civilians alike? 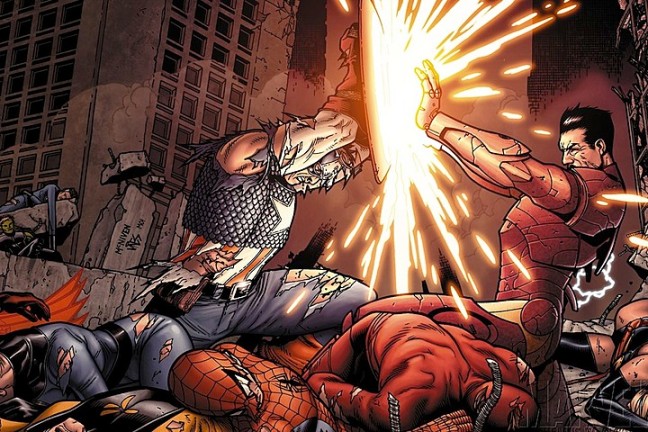